The Spatial Planning and Information Directorate (SPI) of the Department of Rural Development and Land Reform identified the need to establish an effective system for the gathering of data on urbanisation to inform spatial planning and land use management in the province of KwaZulu-Natal. This is a far sighted initiative aimed at providing information which can be used to draw together the rural and urban dimensions of spatial planning in the province. It is suggested that this will make a valuable contribution to planning in the light of the enactment of a single piece of planning legislation in this province (Provincial Development and Planning Act (no 6 of 2008) which will serve to include all areas previously administered under different pieces of planning legislation.

Accordingly two projects were identified by SPI in 2007-8. The first of these was the Rural Settlements Project aimed at locating all rural households in KwaZulu-Natal and defining settlements on a density basis. The settlement /population growth dynamic was added to this project with an update in 2008-2009. The second project under this initiative was launched in 2008-2009 aimed at urban areas, in particular, with the view to providing the following type of data: a working definition of urban areas, changing dynamics of the urban edge in urban areas (1994-2008), growth patterns of urban areas (population and area) and land use trends in towns.

In order to generate data for the Urban Edges Project the team developed a methodology which could be used to quantify and capture data on the location and growth dynamics of urban areas in KwaZulu-Natal. The intention was for the data generated to begin to inform the spatial planning process in the province. The intention was further for the data from this project (Urban Edges), where interfaced with that emanating from the Rural Settlement Project (initiated by SPI), to be used to provide a complete 'picture' of the nature and extent of urban development in KwaZulu-Natal.

Density Polygons: The determination of the current and historic edge involved a number of steps. As part of this project, Eskom made available their building count based upon 2006 aerial imagery. The first step in the process involved the generation of density polygons based upon building proximity and density. The project team worked through the province and verified all the higher density areas and determined the urban status of the area.

Population: Population was finally determined based upon a combination of the 2001 census and the Eskom building count. 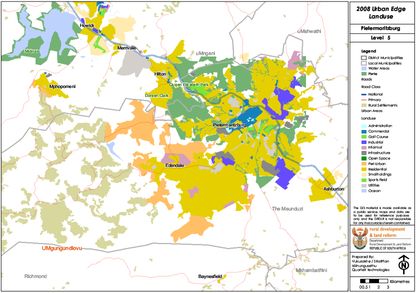 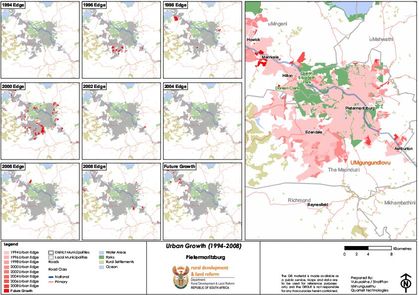