The objective of the load forecast is to provide a twenty year forecast of expected load on high voltage transformers. This forecast is then used to model future load flows and facilitate long term infrastructure rollout and maintenance planning. In order to derive these forecasts, a number of factors need to be taken into account including:

Current and future landuse
Usage profiles (i.e. What is the load at various times of the day)
Load growth (i.e. as consumers become more sophisticated or wealthier their consuption increases)
Future developments
Economic factors
Forecasts from large power users, such as mines and other industry

The study area is situated in Gauteng and can be effectively divided into two portions; that largely supplied by City Power in the east, and the more rural area, dominated by agriculture and mining, to the west and surrounding the towns of Krugersdorp, Randfontein and Westonaria. 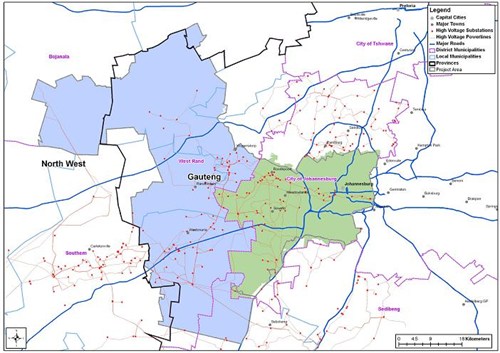 Two different approaches were taken in the areas since the area supplied by City Power had been subject to a recent Network Master Plan itself, undertaken by Netgroup. The approach taken for the City Power area is not detailed here. The approach taken for the western portion of the area, where forecasting was done on a spatial basis, is described here.
The methodology aims to:

Land use data (Department of Agriculture) was used as the basis of the analysis. This data was intersected with the cadastral information (Surveys and Mapping) to provide land use by cadastral parcel. Each of these parcels was then assigned a feeder by buffering 11kv transformers and intersecting the buffers with the landuse/cadastral data. 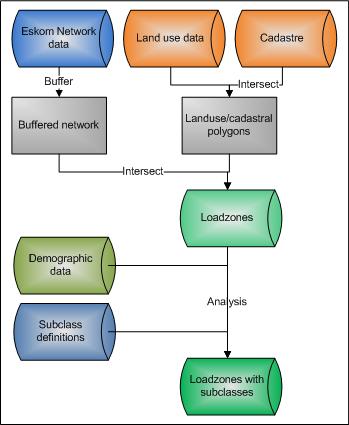 This led to the definition of five hundred and thirty one load zones for the study area. Spot checks using Spot 5 imagery were then used to validate the data, and to clarify areas of uncertainty.Â Landuse classes were mapped to the subclass categories defined in the modelling tool (Netgroup Power GLF ver 1.3.2.2), and baseloads determined, based onthe subclass parameters and the size of the loadzone. Population and house hold statistics, sourced from both Statistics South Africa and Eskom were used to estimate households and population for each of the polygons. Â These load zones were then fed into PowerGLF where forecasting was completed. 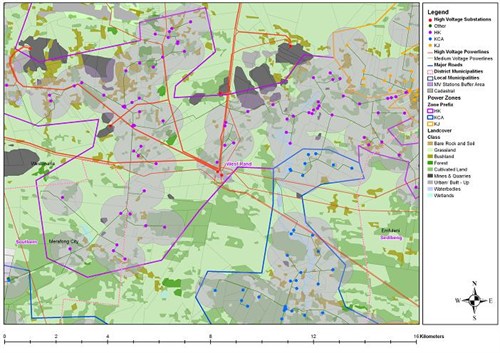 The results of the spatial forecast were compared with the results of the Economic analysis and were found to be broadly in line. Â Growth predicted by the economic models matches well with the demand forecasts.

In interviews held with Eskom customer account executives, large power users were identified (LPUs). For the purposes of this study, only large power users with a maximum demand over 1GVA were considered to be LPUs. Â Data for LPUs were included in the model.

Strategic planning documentation was scrutinised for the study area and new developments and growth areas were identified through interviews with relevant representatives of the municipalities in the area. These growth areas have been included as additional loads in the forecast.

This work was undertaken in conjunction with Inspired Interfaces, Isikhugusetu, Keith Moors and Clive Coetzee