This project was initiated by the Department of Land Affairs (DRDLR) in KwaZulu-Natal with the view to updating the 2008 rural settlement database on the size, location and nature of services available to these areas in the province.Following the terms of reference for this project, the central aims are as follows:

In order to successfully update the 2008 rural settlements data and their associated services profiles, in rural areas of KwaZulu-Natal, the following methodology was adopted for this project:

In terms of the project brief, numbers of homesteads (families)Â was applied as the first criteria to settlement delineation in the following areas of KwaZulu-Natal:

The second criteria involved identifying settlement density (i.e. number of homesteads per unit area).Â  The criteria applied here involves selection of settlements where homesteads are not more than 150 meters apart and in the case of (a) above where there are no fewer than 10 homesteads 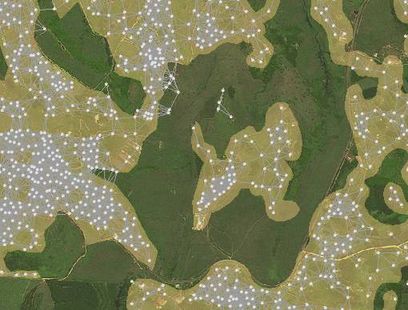 Based on the comparison of data the following trends would appear to have emerged over a period of 5 years (ie. 2001-2006)

These trends do not appear to always follow arguments indicating that households are generally moving to places of greater economic opportunity.Â  In cases this may be the case, but not as a general rule.

A further observation from the spatial mapping perspective is that where settlements in the past were separate stand alone units they have tended to merge with one another (Figure below).Â  This has contributed to reduction on number of settlements, but does not account for the overriding reduction in number of households. 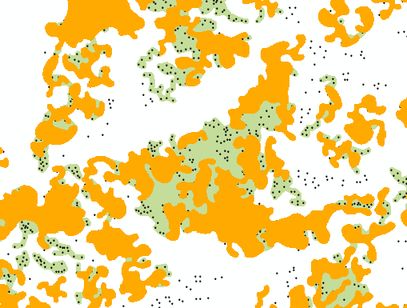