The umzumkhulu catchment assessment was a project commissioned by the department of Water Affairs (DWA) to undertake a full hydrological study of the uMzimkhulu river catchment. As part of this process the full project took modelled current and planned water usage as well as identifying current and potential commercial timber in the area.

Quartex was involved in the project to provide GIS support and analysis and hysrological support. As part of this process we undertook the following key components of the project:

Utilising existing aerial photography and 2007 landuse, we were able to verify and enhance the 2007 landuse dataset to provide a comprehensive dataset of current landuse in the catchment. This provided the main input into the hydrological modelling. As part of this excercise all river courses (4 levels) and the quaternary boundary were digitised based upon the aerial photography. Additionally, all farm dams and wetlands were also digitised. 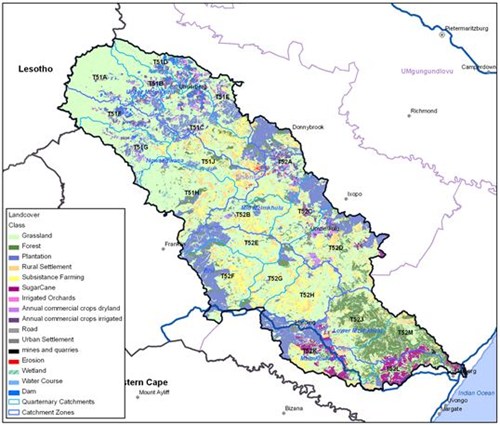 Study of agricultural utilisation of water based upon WARMs data and onsite survey. as part of this process an agricultural crop demand was determined and presented at a quaternary catchment level

Based upon this, suitable areas were then divided into: